The Friends of Molesey Library survey

The Friends have create an online survey to find out a bit about users of the library and what they like and don't. It will take no more than five minutes to complete and you could be helping to improve the service and make the library more popular. We thank you for your time!

Please click here to take survey
Posted by Steve Bax at 23:01 No comments: 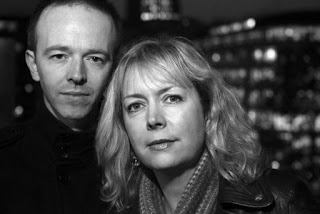 A CRIME thriller set in Molesey? It sounds unlikely but it could happen if local author Louise Voss has anything to do with it.

Louise, from West Molesey, wrote the hugely popular Catch Your Death and Killing Cupid novels - both Amazon bestsellers - together with her writing partner Mark Edwards.
And although Molesey has yet to feature in her work, she hinted that it might in future.

Louise said: "I’ve lived in Molesey for nearly 10 years, and I love it. I don’t think I’ve ever been to Tesco’s and not seen someone I know. I haven’t ever set any of my writing here, but I’m sure I will at some point."

Louise and Mark will be visiting Molesey Library on September 7th 2012 from 7.15pm as guests of the Friends, and will talk about their books and the secrets of their success. They will sign copies and there will be wine and nibbles provided.

Louise discovered a love of writing as a teenager when she kept "cringeworthy diaries" and decided to become an author after taking a writing class in in 1990s. She found an agent, and wrote two manuscripts but it was three years before her first novel To Be Someone was published. More were to follow.
Louise spotted Mark on a BBC documentary about aspiring authors in 1999. They began to exchange regular emails and eventually to write together and to self-publish.

"At first we used to write alternate chapters - which was easy in Killing Cupid, since it has separate male and female narrators. Our second novel together, Catch Your Death, was written in the third person, and we would write a chapter each and then edit each other’s chapters to add our own ‘voice’ into the mix. Mark tends to write all the psychopaths and the violent bits, because I’m a wimp."

Louise and Mark were the first British self-published authors to top of the charts of internet book retailer Amazon, and as a result Harper Collins gave them a six-figure four-book deal.

Louise said: "I REALLY hope people will come along and meet us on September 7th. Both Mark and I thoroughly enjoy these evenings, meeting people and answering questions. It’s particularly great to be able to participate in an event that will raise funds for the library, and it should be interesting, especially to anybody with an interest in writing or publishing." 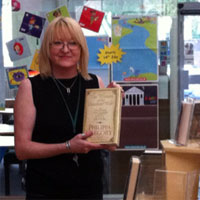 STAFF and users of Molesey Library have welcomed a new manager - Joanne Ryan.
Joanne took over in June, having previously worked for luxury clothing companies Aquascutum and Jaeger but fancied a career change.

She is originally from Liverpool and lived in Surrey for 12 years, currently in Hampton with her cat and her partner who also manages a Surrey library, although his is based within a high security prison!

Joanne said: "I love the village-like community spirit of Molesey. The fact that I have seen so many familiar faces already during my time here is a testament to the fact that everyone is extremely supportive of our service."

She intends to continue the high standards of service established by previous manager Helen Cronin and is aiming to create an even more welcoming environment.

Joanne added: "We have a new and seating area where you can ‘put your feet up’ and relax with a nice coffee and a good book."

She is excited about the 'Story Lab Summer Reading Challenge' currently under way to get kids more involved in the library, as well as an upcoming event called 'Ancestry', where library visitors will be able to investigate their family history, and 'Get Online' - a crash-course introduction to basic PC skills and internet browsing.

As you would expect Joanne is a great lover of books, and her favourites are anything to do with Medieval and Renaissance history. She also enjoys fiction including Yaan Martel’s Life Of Pi and The Lovely Bones by Alice Sebold.

If you are passing why not drop in an say hello to Joanne and her team.
Posted by Steve Bax at 22:49 No comments:

Friends AGM is a huge success!

The Friends of Molesey Library would like to thank all of the library users and supporters who attended our inaugural AGM on January 31st.

The Friends committee were delighted with the turnout and the level of support for the library which was evident from everybody in the audience.

Now that our committee members are in place the work begins to raise awareness in the community of the Library and its services and to fundraise for specific projects to improve the experience of library users.
Posted by Steve Bax at 01:41 No comments:

Following the very welcome news that Molesey Library is to stay open and will continue to be run by professional librarians paid for by Surrey County Council, a group of residents who campaigned to save the library decided to form a friends group.

On Tuesday January 31st the Friends of Molesey Library will be holding its inaugural Annual General Meeting (AGM) to agree a constitution and appoint officers. If you are a user of Molesey Library or a local resident we very much hope you will be able to attend the meeting at 7pm.

As well as dealing with the business of the AGM there will be a chance to hear from the manager of Molesey Library, Helen Cronin, and some nibble and wine. It will also be a chance for you to have a say on some of the ways you think the Friends of Molesey Library can help to improve the library itself.

To view the AGM agenda click here, and to read the proposed Friends of Molesey Library Constitution please click here.
Posted by Steve Bax at 17:47 No comments: