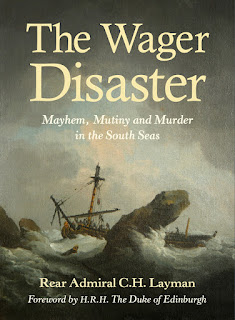 With Christmas and New Year almost upon us, the Friends are enjoying a rest before making preparations for our Annual General Meeting on Tuesday 24th January 2017.

As usual we will be inviting local residents to join us at Molesey Library for the meeting and, at the close of the formal business (which should not take very long), you will hear from a special guest speaker who this year is a senior naval officer-turned author, Rear Admiral Kit Layman.

Mr Layman is a veteran of the Falklands War, where he commanded HMS Argonaut and the aircraft carrier HMS Invincible. His 35 year naval career also saw him serve at NATO Headquarters during the collapse of the Soviet Union. So who better to bring to life the drama of a real life historical account of war, mutiny and man against the elements? It's all in his book 'The Wager Disaster – Mayhem, Mutiny and Murder in the South Seas', which he'll be speaking about on the night.
Readers of the book are transported to 1741, where Britain is at war with Spain. HMS Wager is part of a small squadron commanded by Commodore Anson which battled round Cape Horn into the Pacific to take the war to the Spanish possessions in the South Seas. The ship encountered hurricane force winds and wrecked on an uninhabited island off the coast of what is now Chilean Patagonia. About 140 Wager men reached the land, most of them then to be lost through starvation, exhaustion, hypothermia, drowning, and sometimes violence.
Gunner Bulkeley led a party who mutinied against an unpopular captain and set off in an open boat with no chart. His 2,500 nautical-mile journey was an epic feat of navigation and one of the greatest castaway survival voyages in the annals of the sea. Only 36 men (including Midshipman Byron, grandfather of the poet) eventually made it back to Britain, where their tales of fearful ordeals in a far country caught the imagination of the public. This book uses their accounts to piece together the story of a dramatic fight for survival under extreme conditions.
Entry to the event is FREE of charge. A Merry Christmas to you and please do come along and join us for the AGM in the New Year.
Posted by Steve Bax at 16:58 No comments: