New author events at Molesey Library: Living with the Mafia!

Our Author Events at Molesey Library go from strength to strength and tickets are now on sale for the next two evenings in the current programme.

On Tuesday October 28th 2014, Walton-based author Francesco Scannella will talk about his book ‘Sicilian Shadows’ and his childhood living with the Mafia.
Francesco was born in England of Sicilian parents but, when he was seven, his father decided that he had been a foreigner long enough and he was uprooted from his suburban London home and sent, like a lamb to the slaughter, to the heartland of the Cosa Nostra.
In the Sicilian village of Mussomeli, Francesco had to learn to live in a world where violence, lying and cheating were admirable and where you judged people less by their own virtues than by the power of their connections. ‘Siciiian Shadows’, Francesco’s first published book, is an open and at times brutal account of an extraordinary period in his young life.

On a gentler note, we are looking forward to welcoming best-selling author and former Molesey resident, Penny Vincenzi, to talk to us on Tuesday November 25th 2014.
Penny has recently published a new book ‘A Perfect Heritage’, which tells the story of a legendary cosmetic company and the people who work within it. Founded in 1953, the House of Farrell has fallen on difficult times, and the family who still have control of it have been forced to look for help from an outside source. The power struggles between the matriarch Athina Farrell, still its
figurehead, and the hyper-cool and high-powered Bianca Bailey, moved in by the money men to save the company, is fought out against the background of the glamorous cosmetics industry.
Penny, described as ‘the doyenne of the modern blockbuster’ is one of the UK’s best-loved and most popular authors. Since her first novel, ‘Old Sins’, was published in 1989, she has written fifteen best-selling novels.
Both events will start at 7.30 pm. Tickets for each evening cost £5 - which includes a glass of wine or soft drink – and can be purchased at Molesey Library. Alternatively, you can send a cheque (made payable to Friends of Molesey Library) with a stamped addressed envelope, to Author Event, Molesey Library, The Forum, Walton Road, West Molesey KT8 2HZ.
Posted by Steve Bax at 07:32 No comments:

Molesey Library gets an inspiring talk from author Jessica Hepburn 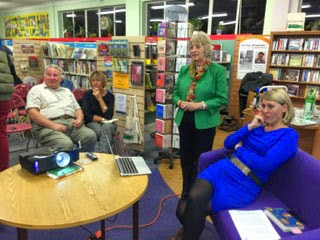 The audience at the latest Author Event at Molesey Library heard Jessica Hepburn give a very inspiring talk divided into what she described as ‘two acts’.

In the first, Jessica told us about her challenging role as Executive Director of the Lyric Theatre Hammersmith, a position she has held for nine years and where she is currently overseeing a very ambitious £20 million redevelopment plan which should be completed next year.

In the second ‘act’, Jessica turned to her best-selling book “The Pursuit of Motherhood’, published earlier this year, which relates her long and so far unsuccessful struggle to have a baby. Her account of years of IVF treatment, multiple miscarriages and a life-threatening ectopic pregnancy is a very personal one and Jessica told us how writing the book had marked a shift from her earlier position of secrecy and shame to one of being totally open about her infertility problem. 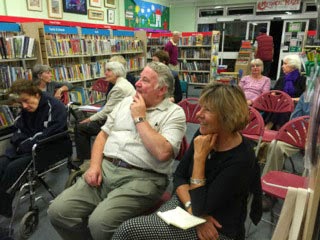 The reaction to the book has made Jessica aware how many people are affected by infertility and over the past few months she has appeared on TV and radio and in the press, and has started writing a widely-read blog, to open up discussion of the issue. She felt that she could now take some positives from her own experience, including becoming herself again after years of secrecy and discovering a love of writing – she is currently embarked on a second book, due out next year, which will explore motherhood and childlessness.

She summed up her philosophy as being “If you can’t change the outcome, change your attitude to the outcome’. 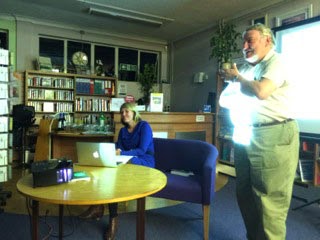 Jessica concluded by telling us about the latest challenge she has set herself – swimming the English Channel! She hopes to attempt the crossing next year and, given her enthusiasm and get-up-and-go attitude, you can surely put money on her achieving it!


Report by Carol Parker
Posted by Steve Bax at 04:54 No comments: