The next Author Event at Molesey Library – on Tuesday April 28th at 7.30 pm – will see a welcome return visit from Elizabeth Proudman, formerly Chairman and currently Vice-Chairman of the Jane Austen Society.

Elizabeth came to the Library a year ago when Molesey author Nicholas Ennos gave a talk putting forward his controversial view that Jane Austen’s novels were written not by Jane herself but by her cousin and later sister-in-law, Eliza de Feuillide. Nicholas’s talk provoked a very lively debate in which Elizabeth mounted a staunch defence of Jane’s authorship.

We are very pleased that Elizabeth has now agreed to return to give us further insight into Jane Austen. Her talk, entitled ‘Who was Jane Austen?” will tell us about Jane and her Hampshire family. Elizabeth will also include more about Eliza de Feuillide, her relationship with the Austen family, and the reasons why she is completely convinced that Jane wrote her books and that Eliza did not!

Elizabeth is a lifelong lover of Jane Austen’s books and for much of her working life was a Blue Badge tourist guide. For over 10 years she led an annual 10- day tour of the Austen sites in England for JASNA (Jane Austen Society of North America). She believes that it is fair to say she has been everywhere Jane knew or wrote about!

This should be a fascinating evening. Tickets for the event are £5 – which includes a glass of wine or soft drink – and they can be purchased at Molesey Library.

Alternatively, you can send a cheque (made payable to Friends of Molesey Library) with a stamped addressed envelope, to Author Event, Molesey Library, Walton Rd, West Molesey KT8 2HZ. 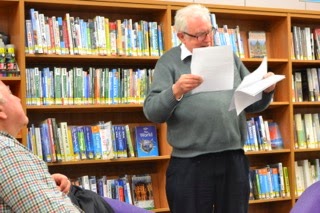 In an entertaining talk at Molesey Library, Twickenham-based author Robert Irvine told us about his recently published first novel called “A Row of Beans – An llotment Murder Mystery” and the trials and tribulations of getting it in to print.

Robert explained that, when embarking on the novel following his retirement, he had heeded advice to write about what he knew. Hence his decision to set the plot in a church parish on the outskirts of London, as he himself has held many voluntary positions in the Anglican Church, and to locate the murder in an allotment, as he and his wife are keen gardeners.


Whilst writing the novel was a challenge in itself, it was as nothing compared to getting it published!
Robert told us about his repeated approaches to literary agents and the depressing litany of rejection slips. Even after having decided eventually to pay for self-publication, the path was by no means an easy one. A duplicitous Mr X ran off with his money, the edited typescript disappeared for months into the hands of a company liquidator, and the first copies off the press were littered with typos and lay-out errors. 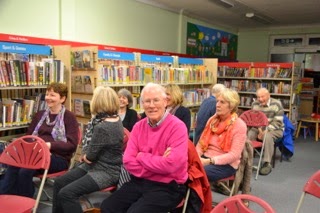 Fortunately, things are looking brighter now. Robert told us about his success in selling the book in California and the approaches he has received to turn it into a film or radio play. Undeterred by the problems encountered in publishing his first novel, he is now well into writing his second.

Robert Irvine’s talk was the latest in our popular series of Author Events at Molesey Library. The next one will be held on Tuesday April 28th when we shall welcome Elizabeth Proudman of the Jane Austen Society.
Posted by Steve Bax at 08:01 No comments: