A message from Pauline Morozgalska, chairman of the Friends of Molesey Library, about this year's annual general meeting on Tuesday 27th January, 7pm.
"The last 12 months have been good for the Library and the Friends have supported manager Jo Ryan and her team in a variety of ways. Come along and find out what we have been up to. For those who think AGM's are boring - think again as we are delighted to welcome guest speaker, Dominc Raab MP to talk about his interest in writing. He writes regular newspaper articles and has had several books published. The evening is a Meet the Author freebee combined with a little business so do come along and you will find a warm welcome." 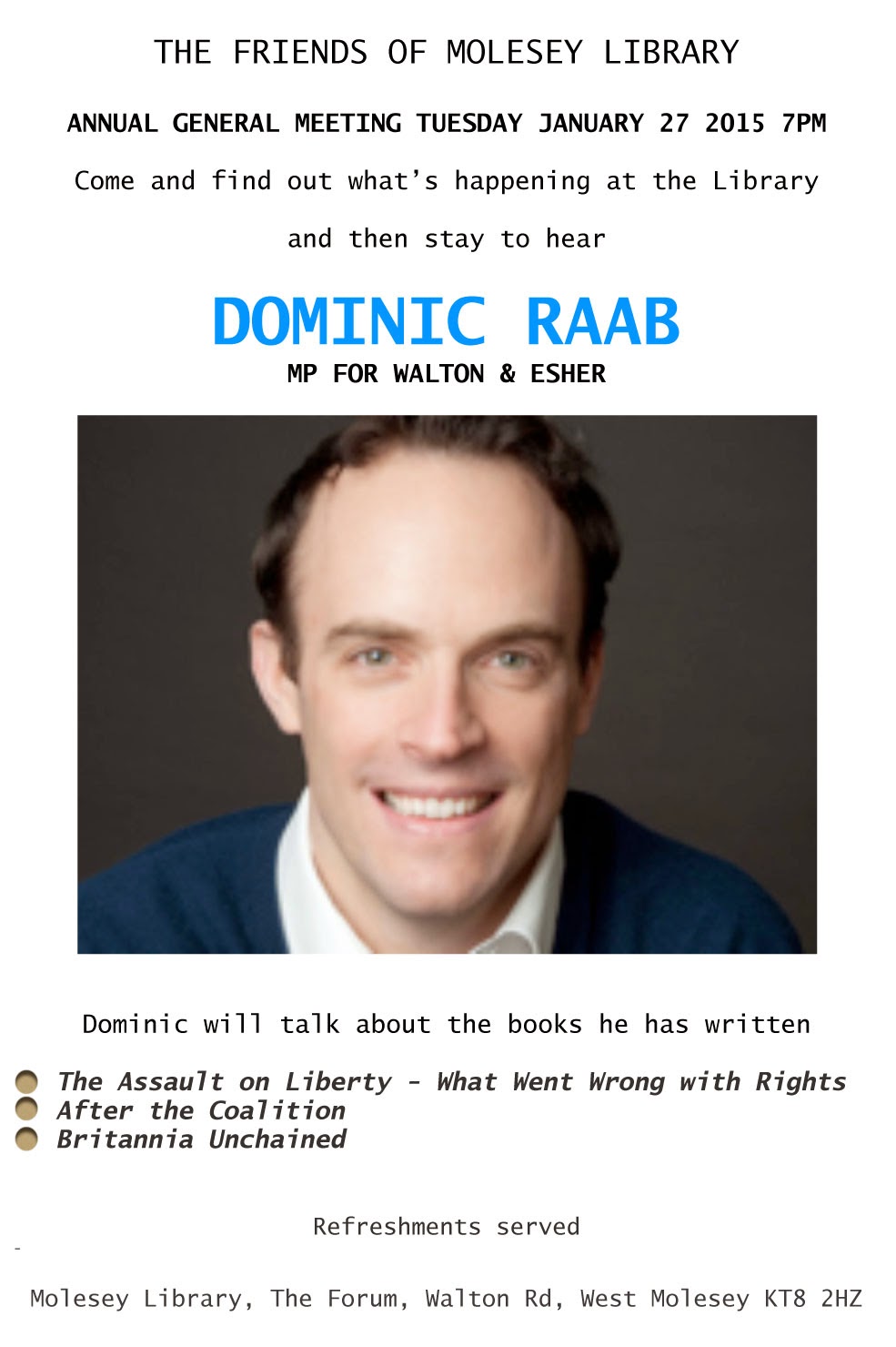 Twickenham based author Robert Irvine will be at Molesey Library on Tuesday February 24th to discuss his allotment murder mystery 'A Row of Beans' and his approach to writing. Tickets are available from the library now. 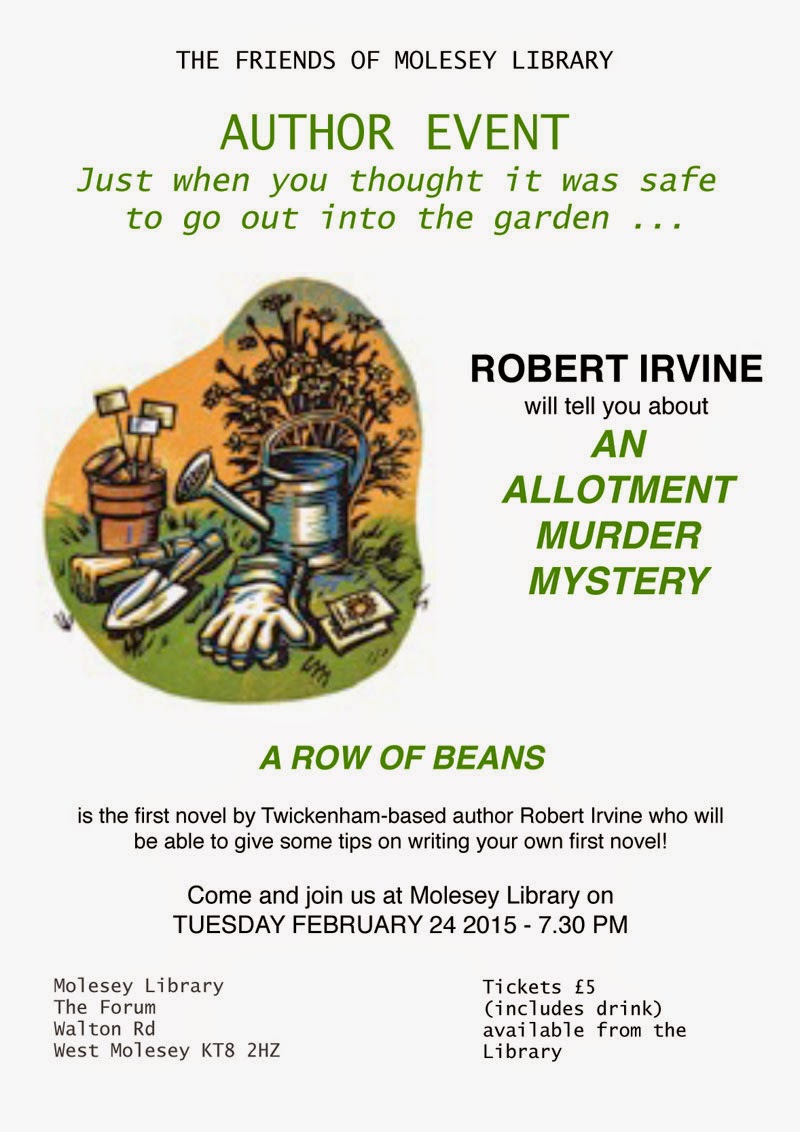 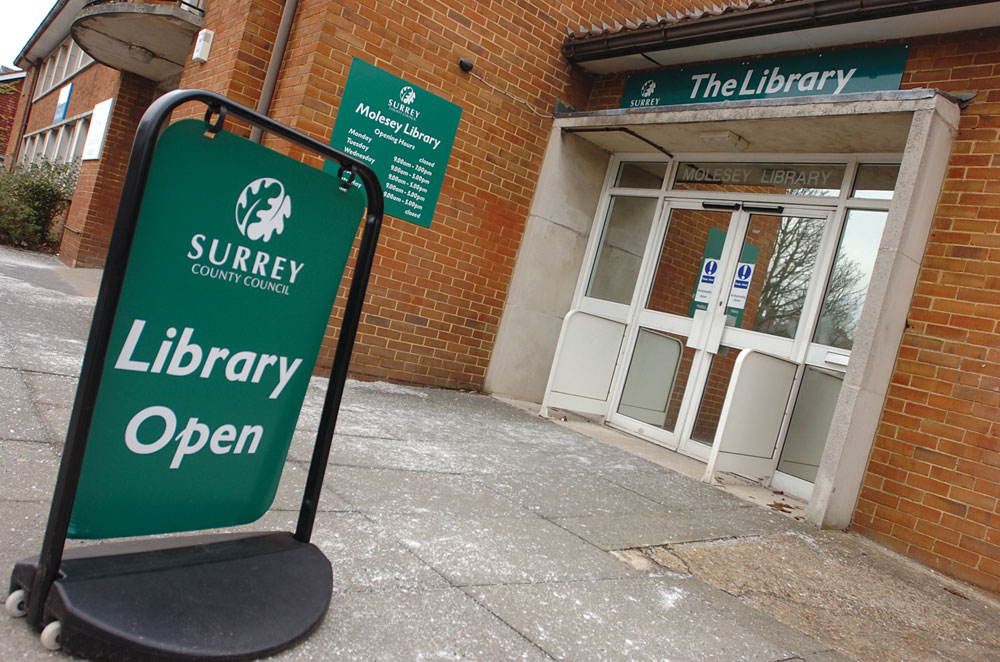 The Friends held their first committee meeting of the new year at Molesey Library on Tuesday January 6th.
Among the topics discussed were arrangements for the AGM later this month, and purchases to improve the garden area and the popular author evenings. Present were chairman Pauline Morozgalska, library manager Joanne Ryan and committee members Steve Bax, Nigel and Elizabeth Cooper and Carol Parker.
Matters arising: A number of plaques have been purchased for the outside benches to let people know that they have been provided by the Friends of Molesey Library. We'll also be buying some tables for outside so that the garden area can be better used in the warmer months.
A long term aspiration of the Friends is to extend the library building, probably with a conservatory, again to make the most of the garden. The next task will be to discuss with Surrey County Council whether it would have any objection in principle to extending in the way proposed, before the FOML goes to the expense of commissioning detailed drawings.
The guest author evenings held at the Library in 2014 were very popular with the local community and it is hoped that this year's line-up will continue the success. John Coope has organised and compered many of the evenings, which last year included travel writer Jonathan Buckley, an insight into the Mafia by local author Francesco Scanella, and a conspiracy theory on whether Jane Austen was the true author of her books, by Nicholas Ennos from West Molesey.
Nicholas' talk put the cat among the pigeons, particularly among members of the Jane Austen Society, and its chairman Elizabeth Proudman will be speaking at Molesey Library as part of this year's line up. Author evenings booked so far are:


It was felt that a microphone and PA system would be a wise investment, to ensure attendees at guest author evenings are able to hear (particularly at the back). John has costed options ranging from £140 to £220. A storage space was identified at the meeting for the kit and speakers.
The Friends discussed arrangements for the Annual General Meeting on Tuesday January 27th, 7pm. Pauline will give a report on the year just gone and the committee will be appointed for the year ahead. It is hoped that the formal business can be concluded quite quickly so that we can hear from the guest speaker, who this year will be Dominic Raab, MP for Esher & Walton. Dominic has written three books to date (The Assault on Liberty, After the Coalition and Britannia Unchained) on the state of the UK, its relations with the EU and his thoughts for the future - and will speak about how he combines his duties as an MP with being an author.
Liz Cooper, Friends' treasurer, confirmed the bank balance is currently healthy and stands at £1,523 with no significant spends to report.
Other matters: The Friday coffee mornings continue to be popular and profitable but it would be a great help if volunteers can be found to assist with baking cakes. The Friends are prepared to pay somebody to supply two cakes per week - if you are interested please leave your name at the library.
The date of next meeting will be Tuesday March 3rd, 2015.
Posted by Steve Bax at 10:38 No comments: