From the Middle East to Molesey 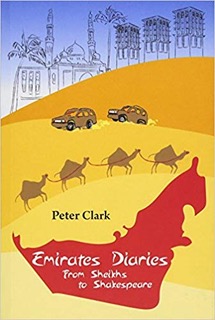 What connects Winston Churchill, Charles Dickens and the Middle East? They are all specialist subjects of Dr Peter Clark who will at Molesey Library on Tuesday 20 November to give a talk.

The Middle East is never far from the news and Peter has known the region for over 50 years, 30 of them working locally for the British Council. In 1988 he was posted to Abu Dhabi to run the Council’s office there. As a self-confessed romantic, he took up his new job rather reluctantly, initially viewing the United Arab Emirates as a brash, consumerist society and lacking in history.

Over time he fell in love with the country and its people. He got to know Abu Dhabi sheikhs and Dubai merchants and people at every level of society. He introduced a riotous Shakespeare company, organised the return of explorer Wilfred Thesinger and greeted royalty, politicians and celebrities.

With fluent Arabic, Peter has had access and insights denied to most visitors. The country was on the cusp of enormous economic expansion and his Emirates Diaries paints an affectionate picture of the country when it still resembled a chain of large informal villages.

Our events organiser John Coope will be 'in conservation' with Peter on the night and assisting the audience to find out more about Peter's life and works. He says: "Peter is a recognised authority on the Middle East and has translated and edited books written in Arabic and published other books in English about the area. He has led cultural tours to many countries in the region. We are lucky to have the opportunity to hear an expert view of an area which features so largely in the news headlines today."

Now back in the UK, Peter has also published two books on places associated with the life and works of Charles Dickens and has a new book looking at locations linked to Winston Churchill.

It promises to be a lively and wide-ranging discussion so we hope you will be able to join us - tickets cost £5 and are available from Molesey Library.
Posted by Steve Bax at 17:26 No comments: