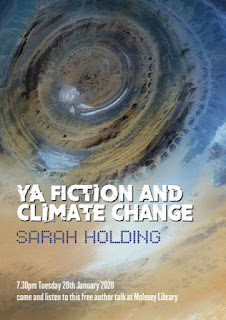 On January 28 2020, we will be hosting our first Author Event of the New Year when we welcome Sarah Holding, who writes for young adults and whose successful SeaBEAN trilogy has been described by former Children’s Laureate Dame Jacqueline Wilson as “A different way of
introducing children to environmental issues”.
Sarah, whose books fall into the burgeoning “cli-fi” or climate fiction genre had been a postman, an architect, a university professor and a community planner before becoming a full-time author.
SeaBEAN tells the story of Alice and five other children living on the remote Scottish island of St Kilda whose life changes when the strange C-Bean Mark 3 shows up and transports them far and wide to New York, Australia and the Amazon rainforest. Their travels soon lead them to understand that there are forces at work which have put the whole planet in jeopardy.
Since SeaBEAN was published in 2013, Sarah has given workshops and talks in over 150 schools, and the trilogy was republished in a compendium edition in 2018. Sarah’s new book Chameleon, which is due to be published in early 2020, is about three genetically engineered humans and is set during the fall of Atlantis, which she speculates happened during an earlier period of intense climate change.

Before Sarah’s talk, the Friends of Molesey Library will hold their Annual General Meeting, which will provide an opportunity to report on our activities during the past year and, as far as possible, to look ahead at possible future developments.
The AGM will start at 7.30 pm and the whole evening is FREE to attend. However, it would be very helpful if you could pick up a ticket at the Library in the usual way so that we are able to gauge numbers attending.
Posted by Steve Bax at 13:29 No comments: