What to expect at the Friends of Molesey Library AGM on 22 Jan, 7pm 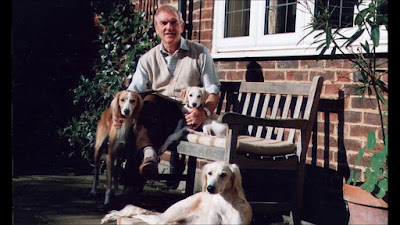 The Friends of Molesey Library Annual General Meeting will be taking place at the library on Tuesday 22 January at 7pm. Admission is free, and we've lined up a distinguished speaker in Sir Terence Clark, a former diplomat and expert on the Middle East.

He will be entertaining us with a talk entitled 'In The Cradle of Civilisation'. Sir Terence will introduce you to Iraq, where he spent nearly 5 years as the British Ambassador, during much of Saddam Hussein’s war with Iran. But, as he will show, it was not all bombs and bullets and in the many quieter interludes he was able to explore this ancient land in depth, often with the aid of a native four-legged ally, his Kurdish Saluki.

Sir Terence was a career diplomat and Arabist and had previously served in many other countries of the Middle East as well as in Europe. He and his wife went to war-torn Iraq with some trepidation in 1985 but found the situation less fraught than media coverage suggested. By showing an interest in the history of Mesopotamia (the Land between the Two Rivers - Tigris and Euphrates), with which Britain has often been closely involved, he had licence to travel far and wide, getting to know Iraqi professionals, academics, artists, tribal sheikhs and people at every level of society and visiting the many historic sites from the Garden of Eden on-wards. In this talk, Sir Terence will highlight some of the fascinating people and places that he came across in the hope that it might encourage a more positive view of Iraq.

Sir Terence was also Ambassador to the Sultanate of Oman. In retirement he has written extensively on the history and politics of the Middle East. His latest book – The Salukis in my Life, here, there and everywhere, from the Arab world to China – describes his many adventures in unusual places with these “Companions of Kings” across the vast region of their natural habitat.

In addition to hearing from Sir Terence you'll also hear briefly from our Chair Pauline and Treasurer Liz and assist in appointing the Committee for the coming year. We will aim to get the formalities out of the way quickly and on to our guest speaker. We hope to see you there.
Posted by Steve Bax at 16:37 2 comments: